Last week I was given the opportunity to attend a social media preview of Egypt: The Time of Pharaohs at the Royal BC Museum. It’s a great exhibit, and I highly recommend you go and visit before its last day on December 31, 2018. If you’d like to see some of my favourite items from the exhibit, check out this Twitter thread.

However, of the Egyptian artefacts on display at #RBCMEgypt, it seemed like motifs of hippopotamuses—that were present in the earlier and middle kingdom motifs—were notably absent in the late kingdom artefacts. Was this a reflection of diminishing hippo populations and possibly local extinctions in that time? In ancient Egypt hippos were considered to be protective mothers, associated with life, regeneration and rebirth, while also being seen as dangerous and agents of chaos. And these characteristics were part of the hippo-like gods in the ancient Egyptian pantheon and culture;

Hippos are unpredictable and powerful animals that can attack an unsuspecting human—they can outrun a human, overturn boats and maul passengers. 😳 Ancient Egyptians, whose farms were clustered around the Nile, knew this well. There were reports of people killed by hippos and medical treatments to deal with hippo bites. But coexistence with hippos was also a risk, since a foraging hippo (which can eat about 80 pounds of vegetation at a time) could decimate a farmer’s field in one night. There’s a reason why the game is called Hungry Hungry Hippos.

But the impact wasn’t one-sided. The hippo population was certainly impacted by people in turn—human expansion restricted their habitat and hippo hunting also took place. Hippo numbers continued to decline since ancient times, and finally went extinct in Egypt in the early 1800s. Even with this impactful range contraction, as seen in this map, hippos are only listed as vulnerable by the IUCN Red List of Threatened Species.

So was the seeming decline in hippo motifs through the #RBCMEgypt display related to a declining hippo population in the wild? Possibly. But it’s more likely it had more to do with the vast choice of artefacts to put on display. However, hippo populations continue to decline, and still need our help to ensure their continued survival.

So it seems that we have a lot in common with our ancient ancestors, even today. And not merely in terms of our impact on wildlife populations around us! Here’s a few of the other finds at the #RBCMEgypt exhibit that illustrate this point.

The Rosetta Stone, which was written in 3 scripts of 2 languages. It’s just like an Ancient Google Translate! 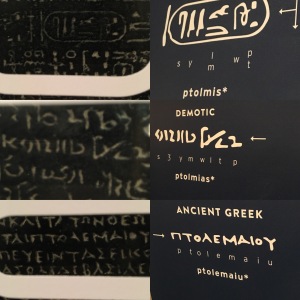 This reconstruction includes a scratched out face. Like a bad Photoshop job. Thanks to an ancient ex?

The social media preview was 3 days before the official opening of the exhibit, so displays were still being installed. However, the position of this ladder (left) struck me as remarkably similar to the immovable ladder in the Church of the Holy Sepulchre in Jerusalem (right). 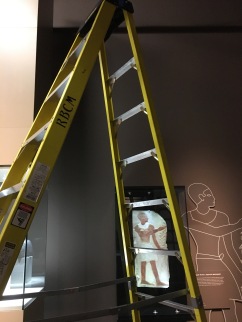 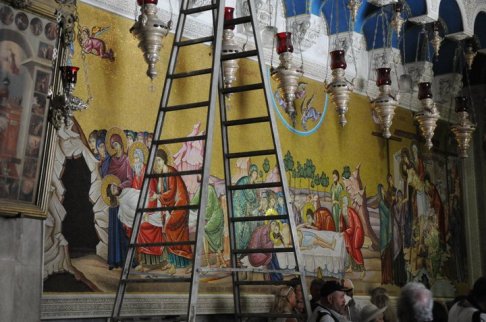 This one display of what remains of the bust of Khafra (left) reminded me of these rocks in Labyrinth (right).

Jareth’s face is only revealed from one angle

And finally, this amused me greatly. There were quite a few of us on this preview of the exhibit, and it took some dodging to stay out of other’s photographs. Here’s a little behind-the-preview photo of the many photographers at work.